Home » Blog » THIS is how funny street names have affected house prices in the UK!

THIS is how funny street names have affected house prices in the UK! 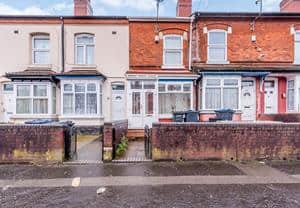 The UK is home to some seriously funny street names. Thanks to our rich cultural history and lots of regional dialects, we can boast some… unexpected street names.

We’ve taken a look at street names in the UK and analysed some of the most unusually-named avenues across the country to reveal the funniest street names that might raise an eyebrow or two – and the impact that risqué street names can have on your house value. We used data from Gov.uk to find average house prices for postcode areas over the last ten years, and compared them to specific streets across the UK to find a percentage difference between the two prices.

With the COVID-19 pandemic and lockdown causing a turbulent 12 months for house buyers and sellers, no-one wants to risk getting stuck in a broken chain – and there’s not a lot you can do about a questionable street name!  But as the economy begins to resettle to pre-pandemic conditions, house prices are on the rise once again, and that includes houses where you might expect the street name to be a bit of a drawback. 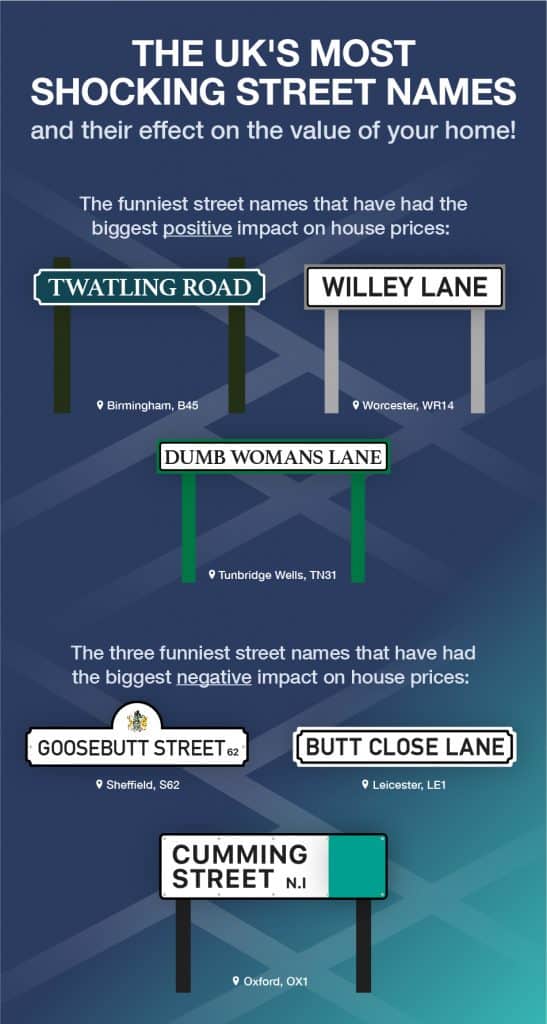 In fact, some of the funniest street names may actually have a positive impact on house prices. And the number one road name that represents the most value? Straight faces all around, please – that would be Twatling Road, in Birmingham B45, where house prices are 96% higher than other houses in the same postcode. The average house price on this street stands at £704,104 compared to an average of £246,027 in the same postcode area. That’s a staggering difference of £458,077 – and proof that if your home ticks enough boxes, even a name that would make your grandma blush can’t hold you back.

A close second prize goes to Willey Lane in Nottingham, with house prices 88% higher than houses nearby, at £422,000 compared to the £163,755 average in the same postcode area. And the third most valuable funny street name? The yes-it’s-really-called-that Dumb Woman’s Lane in Tunbridge Wells, representing an 80% higher property value – the average house prices on this street stand at £797,525 compared to the £341,655 average in the TN31 postcode area.

Looking at the research, the ten funniest street names that have the biggest positive impact on house prices, based on the percentage difference between them and other houses in the same postcode, are:

We’re not sure what it says about the north/south divide that a lot of the funniest street names that result in a positive price bump for houseowners are in the south of England. A shocking seven of the top ten are solidly in the southern counties – and keep your eyes peeled for some shocking street names the next time you’re in Worcester, which has two names in the top 10.

But while some humorous street names have positively impacted house prices, the same can’t be said for others. Some names simply don’t tickle homebuyer’s fancy (or funny bone) enough to offset the awkward element of living on a street with a questionable name.

The worst offender in the UK? That would be Goosebutt Street in Sheffield. Despite a relatively tame name compared to others on our list, average house prices on this street stand at a tiny £49,046, compared to the average of £127,047 in the same postcode area – that’s a huge 89% difference.

Shockingly, the more pleasantly named Christmas Pie Avenue in Guildford also finds itself on this list, with average house prices on this street standing at £422,349 compared with the £608,235 average in the GU3 postcode area! If you’re stuck on a street with a snigger-worthy lane, it might be time to consider a quick house sale.

Here’s the full list of funny street names that have a negative impact on house prices, based on the percentage difference between average prices for houses on that street and houses in that postcode area.

Are you a fan of a funny road name – or are you stuck on a street with a laughable label? Either way, explore our blog for all the latest industry news, house advice and guides to buying and selling.