Home » Blog » Homes of the Future

Homes of the Future

If we say ‘the home of the future’, what comes to mind? Is it like the Jetsons, full of robot butlers whizzing about in spaceships, or are you imagining a fully eco-friendly solar powered home? The future is a hot topic these days, with discussions about what our planet might look like in years to come all over the headlines – but unsurprisingly, here at Good Move, we’re all about the houses. We wanted to visualise what homes of the future might look like, so we dreamed up four possible future scenarios: life on Mars, underwater, up in the clouds and (gulp) an underground post-apocalyptic future.

To help us visualise these visions of the future, we teamed up with CK Architectural MD, Chris Lawson, for his thoughts on how our homes could adapt for different scenarios. With the help of a 3D designer, we are delighted to present the homes of the future.

Is there life on Mars? Well, there might be in the future. The Red Planet might be outside our grasp at the moment, but with Elon Musk and SpaceX doing their best to get humanity to Mars, it’s a potential future home for humanity. NASA are planning their first manned mission to Mars by 2030 – so as much as our potential future home design might feel like science fiction, one day in the not-too-distant-future, it may well be science fact.

Imagine waking up to wide expanses of red sand and mountain vistas, and watching the blue-tinted sunset at the end of the day – a Martian day, that is, which almost like an Earth day, at 24 hours and 37 minutes. 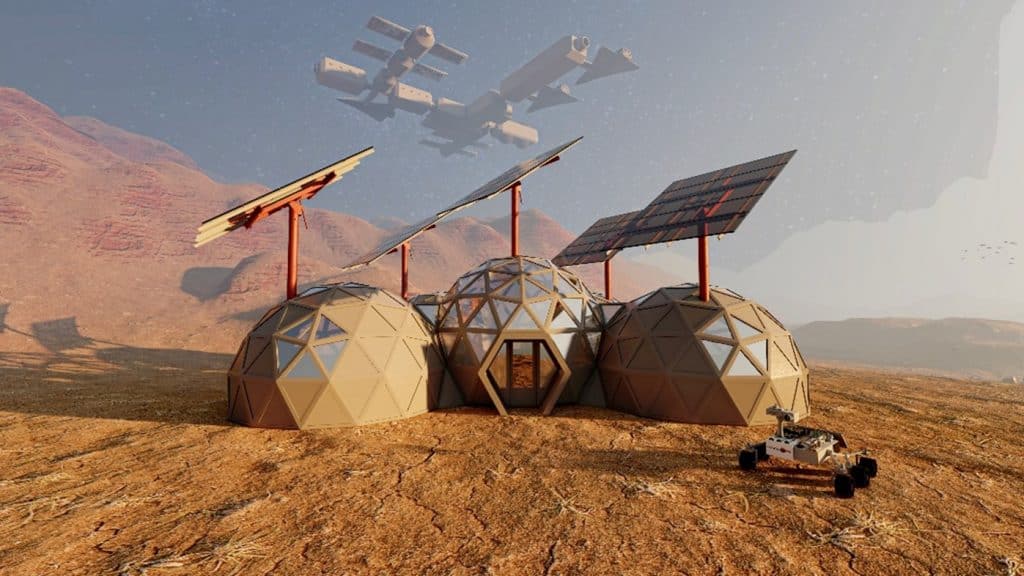 The home itself would be part visible and part underground – providing structural support and protecting those within from the harsh climate outside and from too much light. If you’ve ever seen the film The Martian, you’ll already know that living on Mars puts a lot of stress on any structure – but this future home is designed to be hardy, sturdy, and ready to tackle anything Mars can throw at .

With power and survival being at the forefront of the design, Chris suggested that bubble-like domes might permit easier layering from the upper and lower level along with adding an extra layer of protection. Within these domes, farming for crops can take place, helping our possible future Martian colony to grow their own food. For all-important power generation, these future homes have dedicated solar panels outside the building, so that they can be self-reliant.

The materials used in the future Martian home would have to be based around titanium or heavy-duty plastic or glass to be able to bear the weight of the large structure and make the dome functional.

Alright, it’s not quite The Little Mermaid levels of underwater, but these striking underwater pods would still be an ideal solution for a future aquatic lifestyle. Given that around 71% of Earth is covered in water, it wouldn’t be much of a surprise if one day we might have to adapt to living away from land. 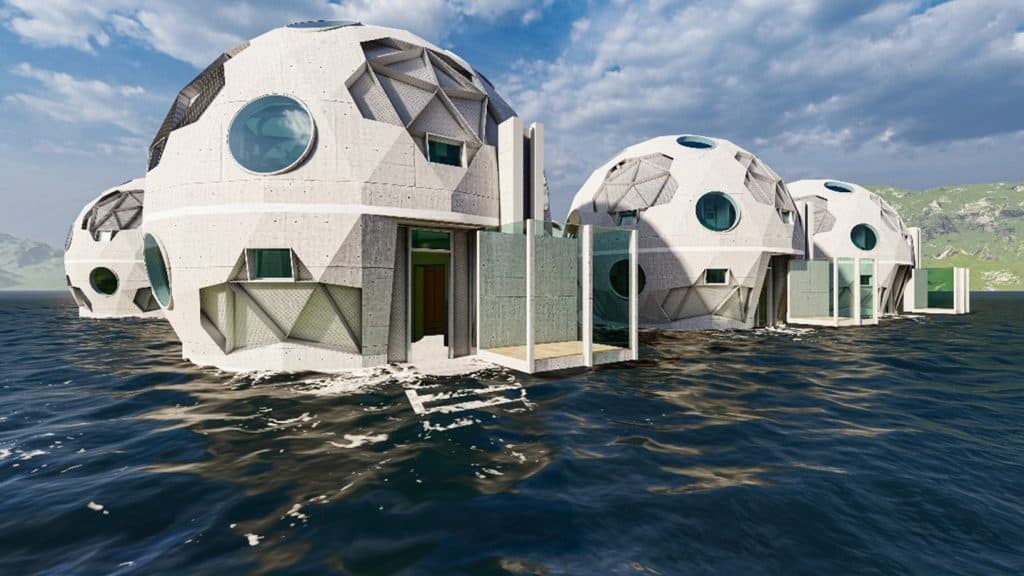 But what’s the deal with these spherical future homes? Well, Chris thinks the structure would likely be made of glass or plastic – strong but lightweight materials that would hold up well to the constant motion of the ocean, as well as allowing plenty of light. Of course, with pressure and depth to deal with, they’d have to be built on some sort of a rig to make sure they were safe and sturdy. No springing a leak here!

Much like the home on Mars, this future home would be dome-shaped in order to help with the distribution of weight, ensuring that the environment doesn’t erode too much and helping to avoid collisions from oceanic debris. With some of the structure sitting beneath the waves, there’d also be lift access so people could get back to the surface.

We might all still be waiting for flying cars, but given how quickly technology advances it might not be such a wild idea that we could at some point live in a flying house! And imagine the views – any Instagram influencer worth their salt would want to pose against a backdrop of perfect clouds at sunset. Who needs a penthouse in a skyscraper when you can live literally in the sky? 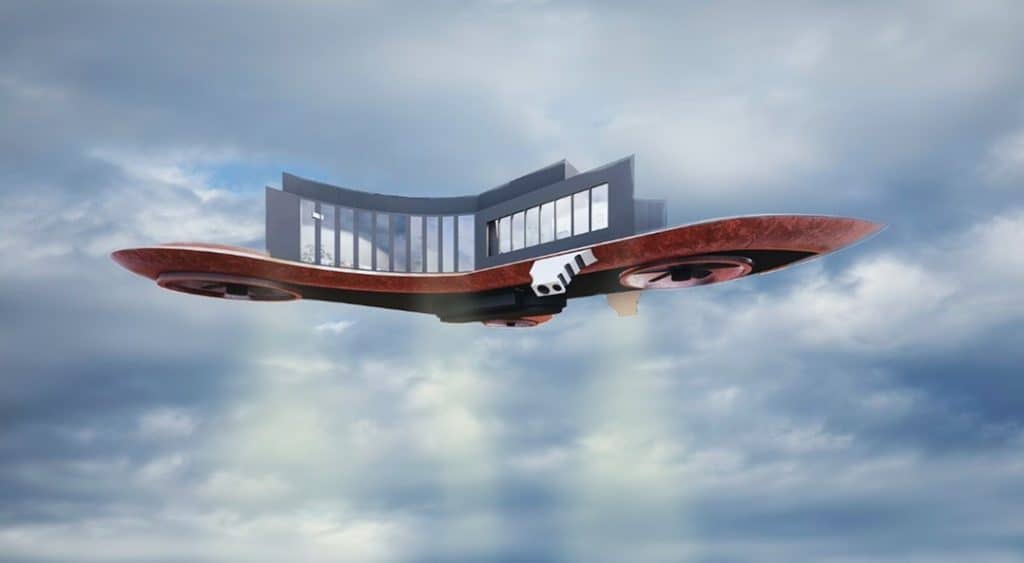 The overall shape would probably be similar to that which we see in drones now, just on a mass-scale, with giant propellers that would spin thus creating an airflow to keep this high flying future home in the air.

As for the build of the home itself, it would need to be very carefully balanced – ensuring that there is equal weight distribution so the house can maintain balance up in the air. In a flying home, that’s probably the most important thing!

Naturally, there’ll be plenty of windows to let in those beautiful views, but probably plenty of blinds to ensure everyone can get a good night’s sleep without being interrupted by the sunrise. With being so high in the atmosphere, UV shielding would be important too, to avoid damage from the sun’s rays!

This is perhaps the bleakest of our potential future visions – but in the event of a serious catastrophe, how would the human race adapt, and what might our future homes look like? Well, we’ve imagined something a little nicer than the post-apocalyptic futures of movies like the Matrix or The Road.

Designed with safety and security in mind, think of this future home as an upgrade on the traditional underground bunker – with as much natural light as possible when you’re hiding below ground from some future nightmare like a nuclear fallout. 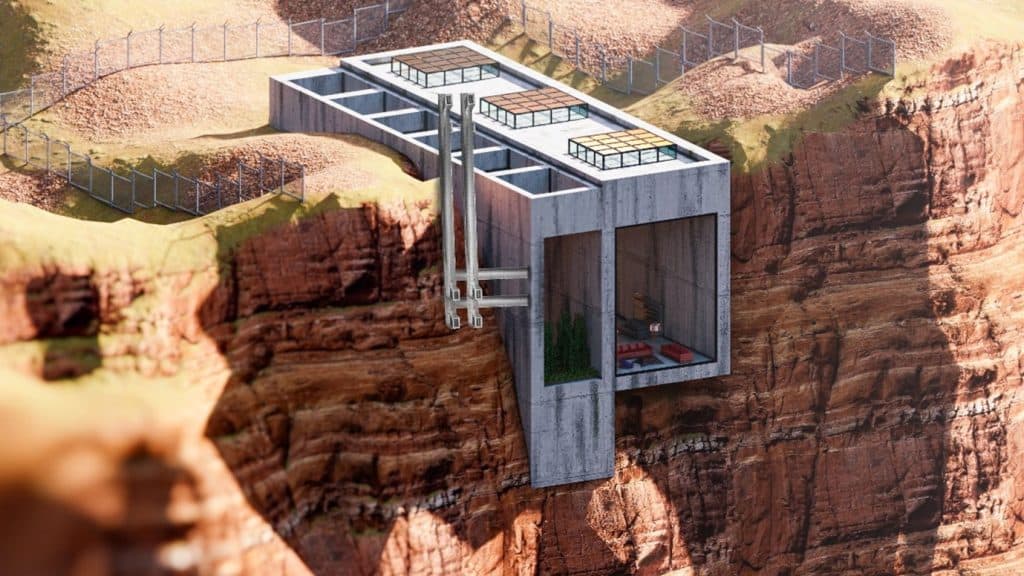 From the outside, this home might not look like much – on the approach, you’d just see concrete walls and barbed wire fences. Not exactly an architect’s dream, but that’s because most of the build would be underground for safety purposes. Due to being underground, any opportunity to let light in is going to be important – from hatch-like windows to surface domes, or even windows built in a hill side. Fresh air is vital, too, so future designers might need to consider some sort of external vent or tube which would allow air to filter in.

Location-wise, in an apocalyptic situation it would obviously be beneficial to have links to possible farming areas, even on a small scale – so you can become self-sustaining, growing your own food supply.

You’d also need some way of collecting and purifying water, to make sure you have enough for drinking and showering! To function and adapt, using mirrors may be another good option. By bouncing the light, you can enjoy natural light, even if your home was deep underground. If you were seriously under the earth, mirrors might even be the only way you could farm and grow crops!

It might not be the most beautiful home you’ve ever seen, but our home of the future is sure to keep you safe in an uncertain future… now let’s just hope it doesn’t ever come to that.

What do you dream of in your future home? No matter what you think the future holds for architectural design, if you’re looking to sell your own home quickly and move to your own future dream home, get in touch with us, and for more home inspiration, make sure you check out our blog.