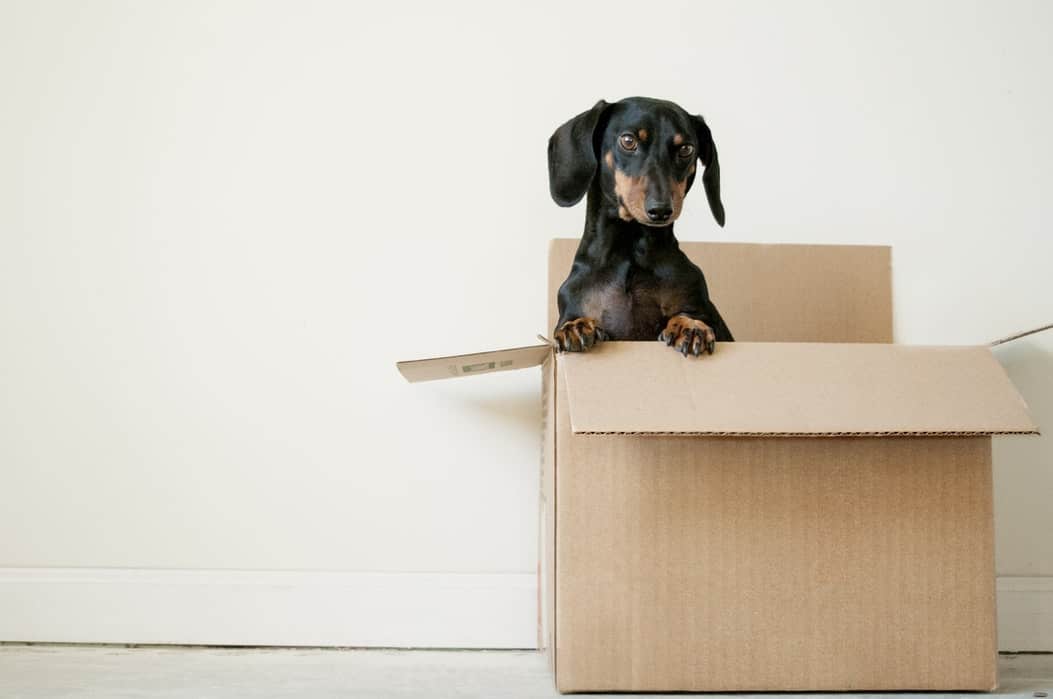 There’s no denying that a pet makes a house a home, and 44% of British households agree! With 51 million pets owned in the UK, dogs and cats are the two most popular animals to have.

Yet as sweet as they are, sometimes, they can wreak absolute havoc on your home! We’ve taken a look at the most destructive pet breeds, to see which ones cause the most damage. 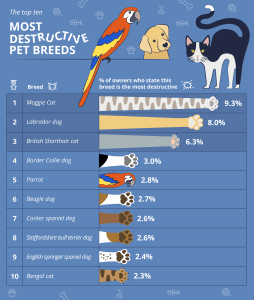 At the top of the list is the Moggie cat! From chewing venetian blinds while trying to chase flies, to knocking over plants in the windowsill, 9.3% of owners say their kitty has destroyed their home.

The British Shorthair, placing fourth, is the only other cat breed to grace the top 10; having left rodent entrails on the carpet, and scratched the wallpaper.

The naughtiest dog breed are Labradors, who have been cited as opening Christmas presents that were not theirs, to chewing holes in plasterboard walls. Border Collies came in fifth place, followed by parrots, who have chewed the wallpaper.

In contrast, the Sphynx cat is the best-behaved pet breed of the bunch, with just 0.2% of owners saying their pet caused disruption. Mini rex and mini lop rabbits are also very well behaved. 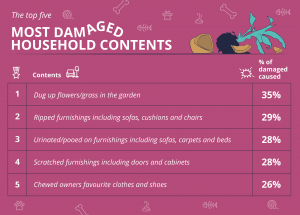 Most of these playful pets wreak havoc in the garden, with 34.6% of respondents saying their furry friends have dug up the flowers or grass. Ripping and tearing furnishings like cushions and sofas are also very common, as are having accidents and staining the carpets, sofas, and beds.

The results vary by city. While moggies may top the list in the likes of Birmingham, Glasgow, and Leeds; in Belfast, Shih Tzus are the most destructive pets, whereas pugs placed first in Newcastle, and budgies in Nottingham.

Scratched furnishings are the most common damage caused by pets in Bristol, Leeds, and Sheffield, whereas in Cardiff and Newcastle, furry friends are most likely to chew clothes and shoes.

What’s more, we even ran a competition asking pet owners to submit images of their furry friends caught in the act. Mario the Cavachon was crowned the winner having destroyed his mum’s plants and getting mucky paw prints everywhere. 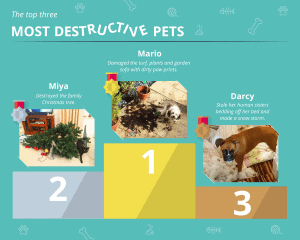 How to stop your pet from being destructive

While pets love to play, it becomes a problem if they start causing regular damage to your home and belongings.

However, there are things you can do to encourage your pet to stop acting like this. For dogs, if it’s more than just typical puppy behaviour, it could be because they’re anxious, stressed, or bored.

If your dog is bored, then start to plan in some time together when they can have physical and mental stimulation, such as taking them for a walk or run, or playing fetch. If they’re anxious, then building up that routine can help them to calm down. Whenever they act out, say “no” firmly, and spray them with some water, and they’ll soon learn to stop.

If you own a cat, you’ll know that scratching is a regular occurrence, as it enables them to claim their territory. If they’re taking it out on your furnishings, however, then cover the item with some foil, and buy them a scratching post to encourage them to flex their claws elsewhere.