Home » Blog » Riskiest Regions: Do you live in one of the UK’s riskiest areas?

Riskiest Regions: Do you live in one of the UK’s riskiest areas?

When it comes to buying a new house, there are so many things to take into consideration, including the proximity of your chosen property to family and friends; not to mention amenities such as bars and restaurants, in addition to your work and good schools.

But one of the most important things to consider, is how safe the area is. While crime rates have dropped by 5% in England and Wales, you need to feel comfortable in your new place for years come.

With that being said, we decided to crunch the data and discover the UK’s riskiest (and safest!) regions*. It’s important to take the findings with a pinch of salt – after all, next to some of a city’s most “dangerous” areas can be some of the nicest.

So, sit back, relax, and find out if you live in one of the UK’s riskiest regions! 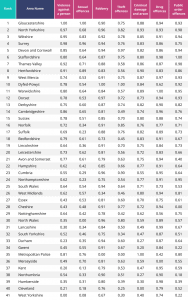 *excludes the City of London.

West Yorkshire comes out on top as the UK’s riskiest region. Home to cities including Leeds, Bradford and Wakefield, this area scored the highest on violence against the person crimes, averaging at 47 per 1,000 of the population. 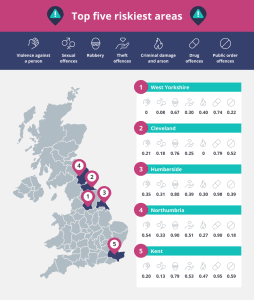 In contrast, Gloucestershire has been crowned as the safest area to live in the UK. With its rolling hills and picturesque valley, this South Western county scored amongst the lowest for all crimes – and had the lowest overall rating for sexual offences and violence against the person.

North Yorkshire is the second safest region, followed by Wiltshire, Surrey, and Devon and Cornwall. With Kent and North Yorkshire aside, there does seem to be a North/South divide. 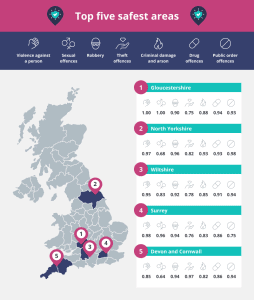 These stats then got us thinking: just how safe does the UK population feel? We surveyed 2,000** people, and 59% said they felt safe, and 23% felt extremely safe. 15% felt neither safe nor unsafe, and 4% and 0.6% felt unsafe, or extremely unsafe, respectively.

Male respondents felt safer overall, as did those between the ages of 25-34.

Location is the most important factor when buying a home

According to Ideal Home, when it comes to buying a house, the number one factor buyers take into consideration is the location. Not only does this mean proximity to local amenities, but it also means crime rates too.

However, location isn’t the only thing a buyer looks out for, with the price, condition, structure, and size of the house all important factors too.

How to keep yourself – and your home – safe

Wherever you live, you’ll want to ensure that you – and your home – are as safe as possible. John MacMahon, director of security technology company RE: SURE, explains exactly how you can do that:

When protecting your person, there are so many little adjustments that you can do to keep yourself safe. If you’re wearing headphones, you’re an easy target for muggers – especially at night and if you’re alone; so, take them out.

Having motion-activated floodlights can be an easy way to improve the overall security of your home. They not only alert you to move around your house, but they’re able to light up the area so that a CCTV camera can capture a better picture of the potential intruder. They can also scare off a potential intruder if they realise, they can be seen.

Set up CCTV in your home so it covers your entire property line. That way, you’ll be able to capture anyone that is coming onto your property, looking through your windows or committing any form of offence. The footage can then be used by the police, and even a court, to catch and sentence the criminal.

Remote CCTV monitoring means that someone is always on-hand to make sure that there is no issue at your home. The technology uses motion detection to alert a control room of the movement, which allows the trained team to intervene. They’ll offer a verbal warning thought a PA system, to deter any potential intruder. This often scares them off, but the police can be called right away so that the criminals have less time to get away or steal anything.

A personal protection app always allows you to stay in touch with a security team. If you ever feel in danger, you can activate your panic alarm, which can send your location to a team that can call the police to your location if you cannot. These apps often have a feature that lets you automatically record and send videos to an operator in a control room, so that they can evaluate your situation and recall the details to the police or other emergency services.

*Crime rates sourced via ONS, year ending December 2019 (and last updated by ONS 23rd April 2020) covering England and Wales. To determine the most and least risky areas we:

**Survey of 2,000 UK homeowners undertaken in June 2020 by OnePoll to determine how safe they feel in their current area from crime.