Getting your foot on the property ladder has never been simple. Rising house prices in recent years have only made it harder for first-time buyers to put down a deposit, and the cost of rent can often make saving difficult.

Taking into account how little money people have leftover to save once they’ve paid for rent and bills, is it any reason most people take 5-10 years to save up a deposit for a house?

To get across just how much money is required to make a house deposit in the UK, the Good Move team put their heads together to work out just how high £40,500 is in individual pound coins. We then compared this to various British landmarks to demonstrate the scale of the money involved.

A standard pound coin measures a measly 2.8mm in thickness. This isn’t big by any means, but now imagine 40,500 individual coins all stacked one on top of the other. Suddenly, that 2.8mm now measures an impressive 114m in height. 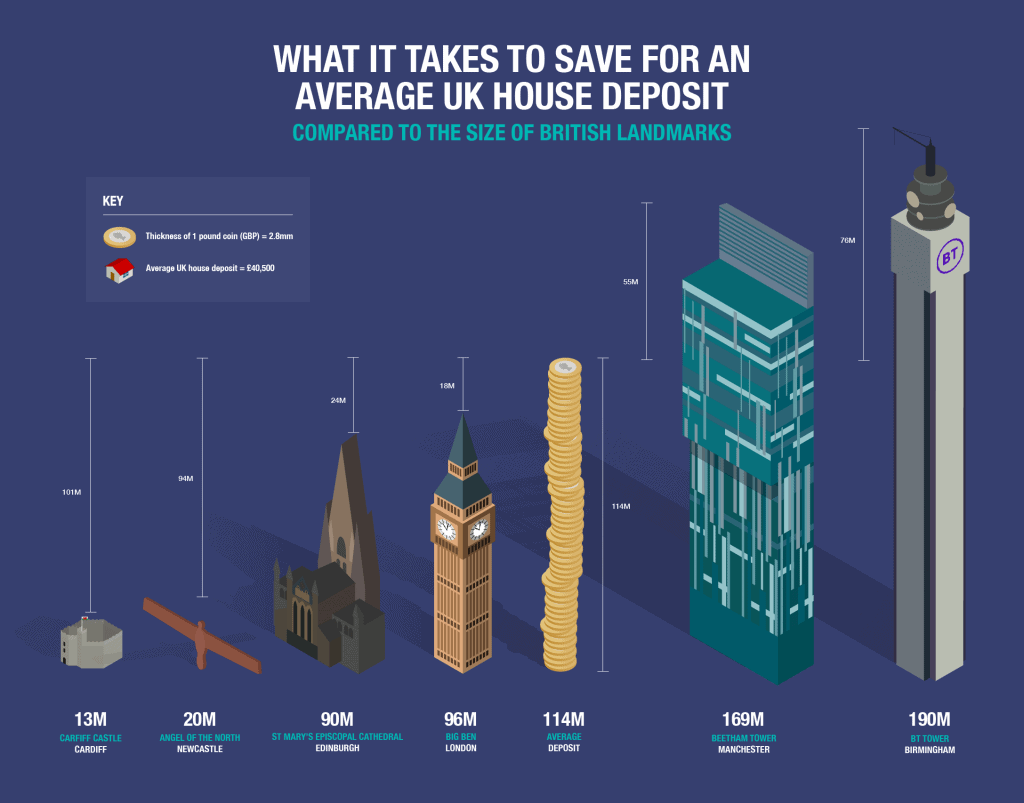 To put that into perspective, everyone’s favourite clock tower, Big Ben, is only 96m tall, meaning the average UK deposit in pound coins is a full 18m taller! St Mary’s Episcopal Cathedral in Edinburgh measures close to Big Ben at 90m, but it still puts our stack of pound coins 24m higher than its ancient spire.

Looking towards some of the UK’s smaller landmarks, the Angel of the North stands at 20m tall and dominates the landscape around it. But the average UK house deposit measures almost 6 times its height. A more southernly example is the popular historical attraction, Cardiff castle. It stands at a mere 13m tall, putting our deposit of coins at just under 9 times higher than its tallest point.

The average deposit is by no means bigger than all the buildings in Britain; however, it gets damn close. The BT Tower in Birmingham and Beetham Tower in Manchester are two of the UK’s tallest buildings at 196m and 169m respectively. Even so, they’re only 76m and 55m taller than the average UK deposit, which still manages to cross the halfway point of both their heights.

Clearly, the average UK house deposit is staggeringly tall, but how does the height of these landmarks compare to the average deposit of the cities they call home?

Naturally, as the capital of the UK, the average deposit for a house in London is far more expensive than in other areas of the country. Buyers in London are looking to spend at least £76,050 on a deposit if not more. In pound coins, that’s 213m, sky-rocketing the average London deposit well-over twice the height of Big Ben and making it two-thirds the height of the Shard; Britain’s tallest building. 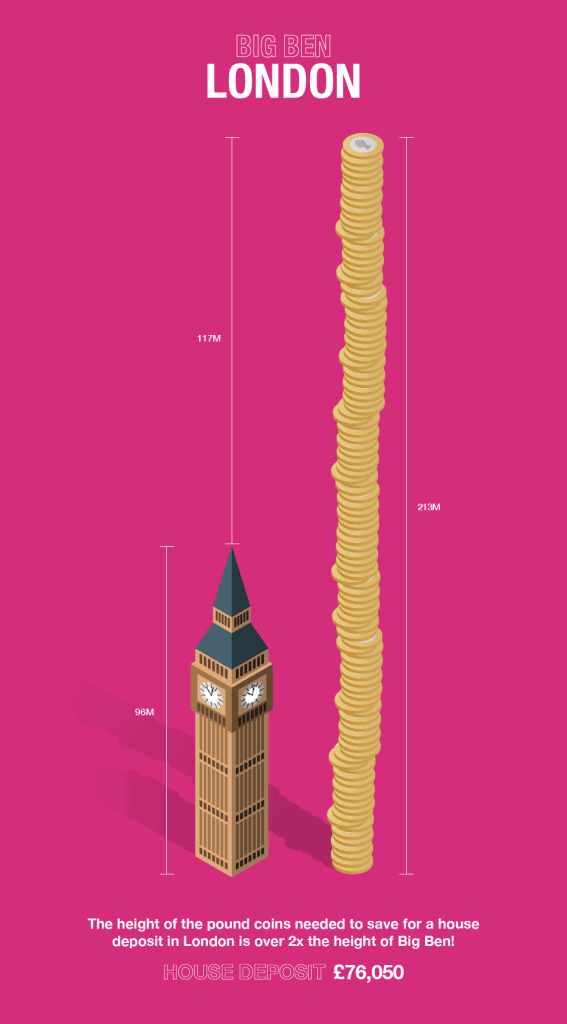 Moving north, the cost of the average deposit drops dramatically to a somewhat reasonable £37,046; 104m in pound coin height. As we mentioned, Beetham Tower stands at 169m, putting the average Manchester deposit at 65m shorter. This is certainly much less than a London deposit but it’s still a substantial amount of money that manages to stand more than half the tower’s height. 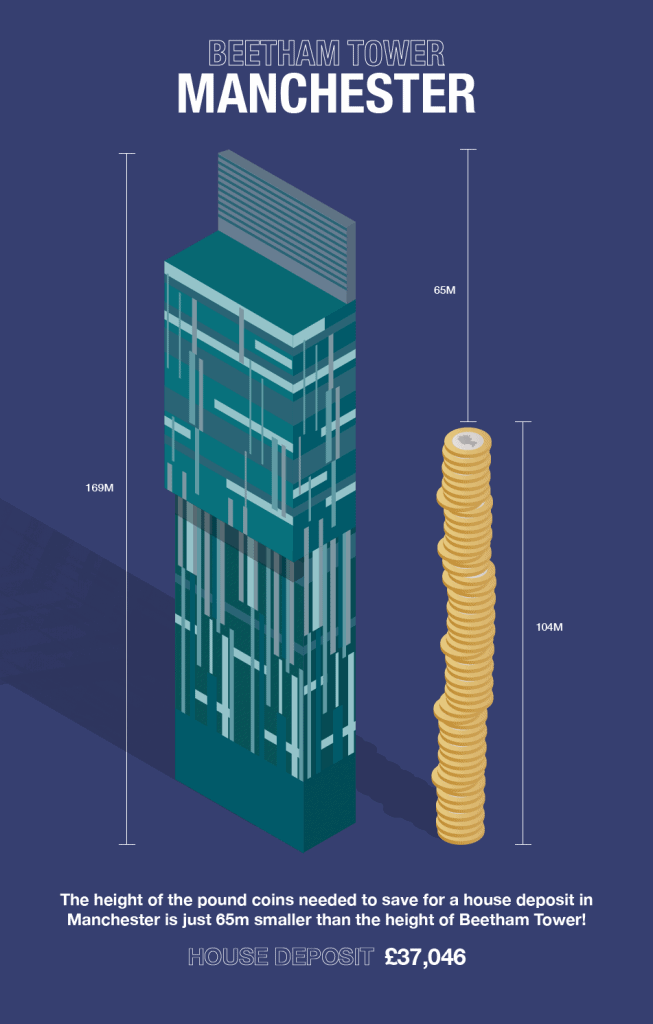 Birmingham is even cheaper than Manchester when it comes to the average house deposit. Buyers are looking to pay a nice round £35,000, the equivalent of 98m worth of pound coins. Nevertheless, much like Beetham Tower, that still puts Birmingham’s average deposit at just over half of the BT Tower’s 190m, the halfway point being 95m, again showing the weight of the cost involved. 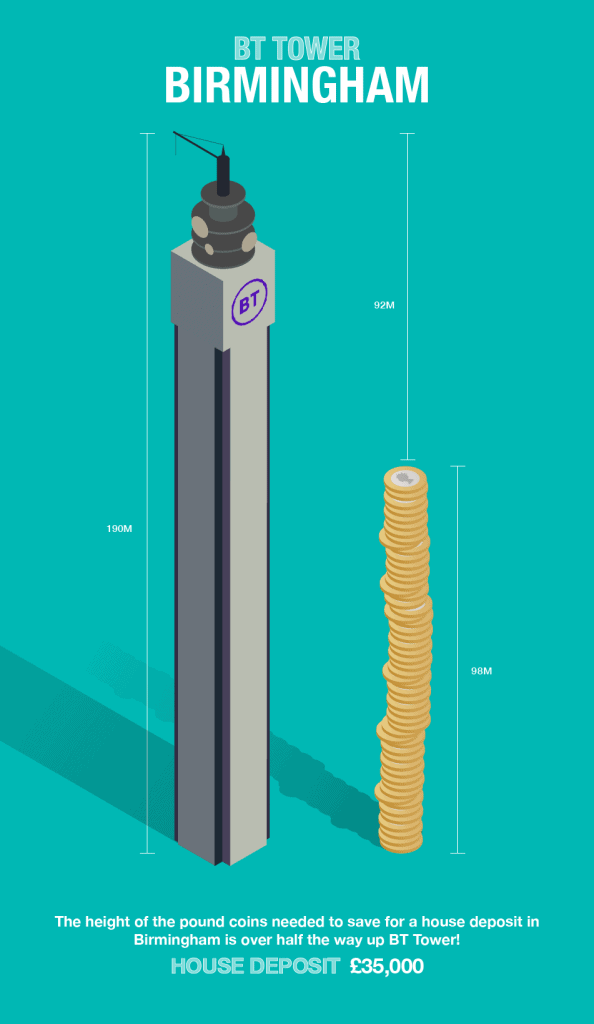 Crossing the border back into Scotland, the price of an average house deposit increases again to £46,110 in the Scottish capital. Turning our sights back to St Mary’s Episcopal Cathedral, which sits at a height of 90m, it’s only dwarfed further by Edinburgh’s average deposit; the equivalent of 129m of pound coins, increasing the height gap from 24m to 39m. 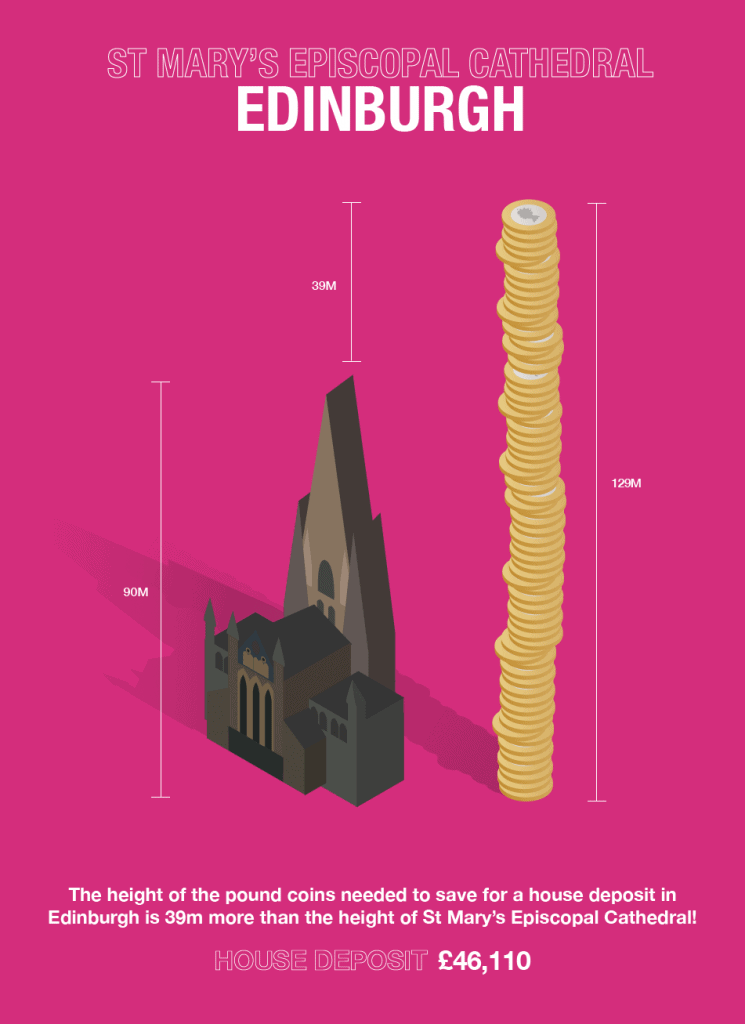 Newcastle has the lowest required house deposit of all the locations we visited, costing slightly less than Birmingham at £34, 638 or 97m of coins. Still, with the Angel of the North being only 20m, that still puts the average deposit at just under 5 times its height, showing how even the most inexpensive cities can still be costly. 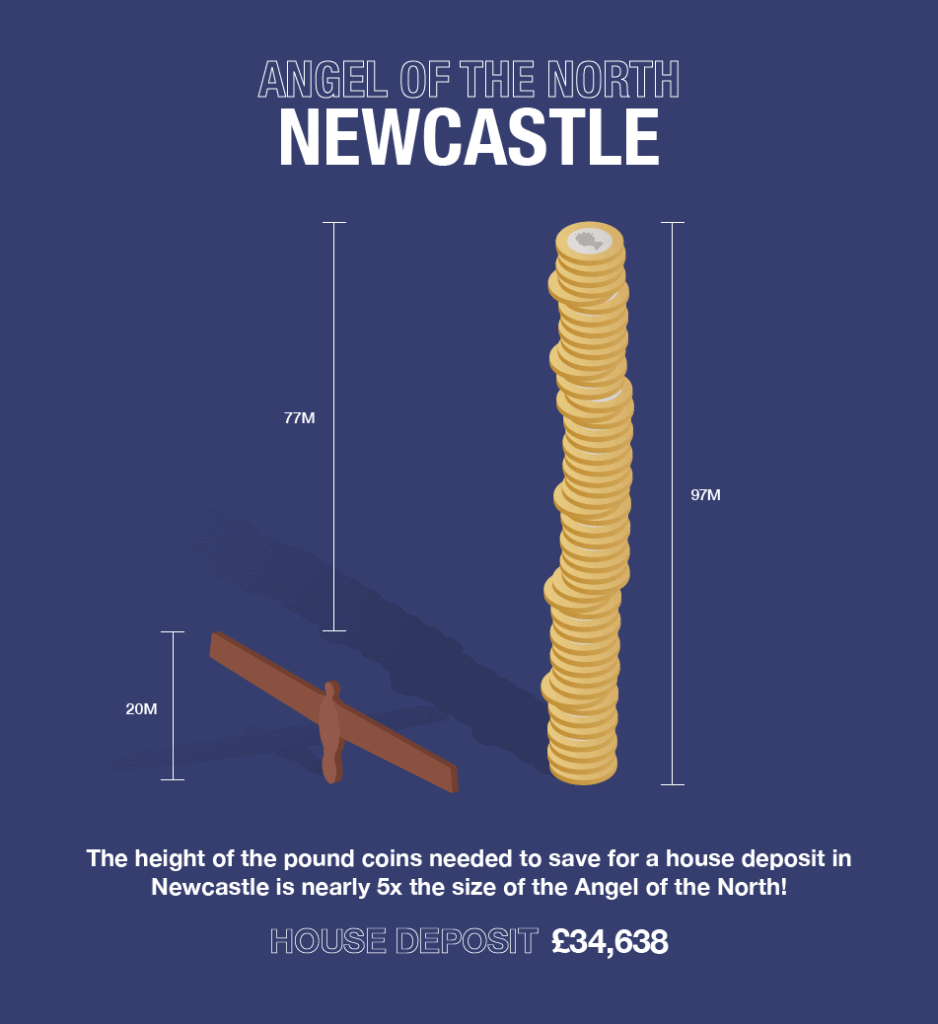 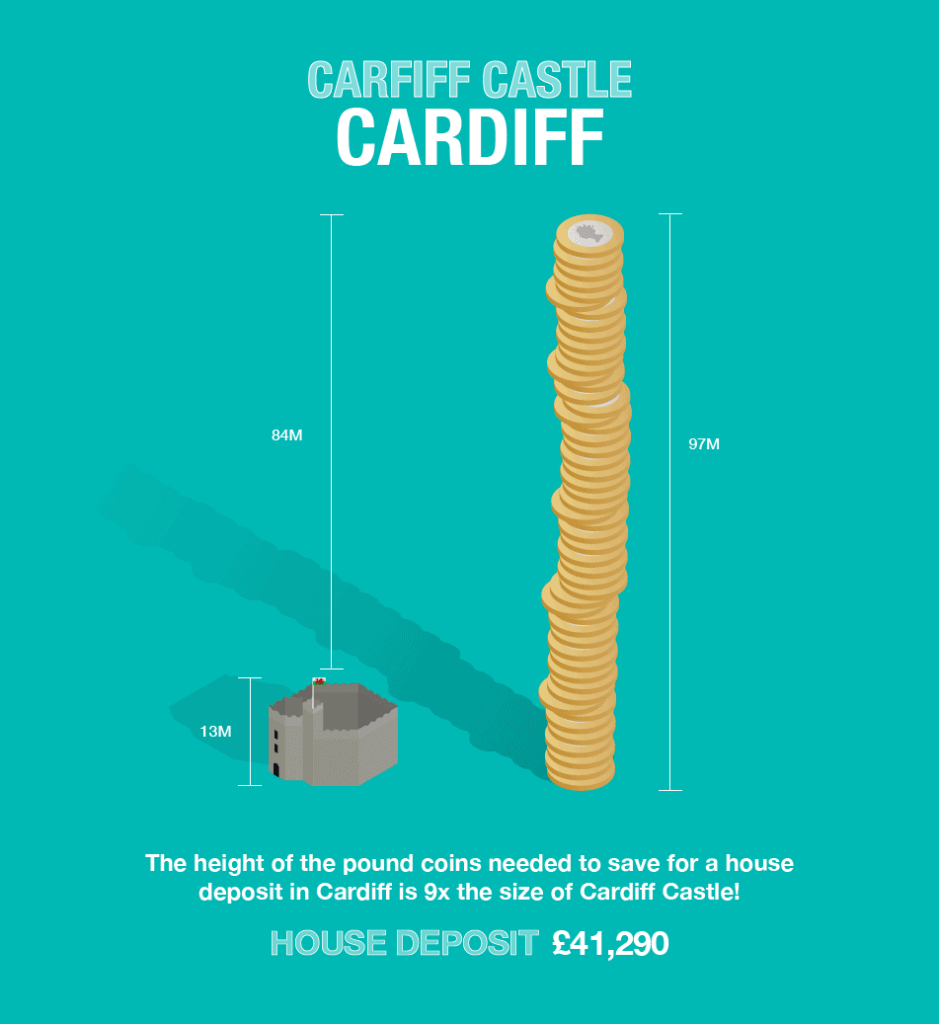 While these figures might seem somewhat intimidating for first-time buyers, and shows the sheer volume of funds required to properly invest in a property, it’s not all bad news. There are plenty of simple and useful things you can do to help prep yourself for investing in your deposit, all of which you can read about here.

And if you’re looking to sell your property or find your new dream home, we’ve both buying guides and house hunting tips right here on the Good Move blog.